Home »Uncategorized»Smoking declines, but vaping is on the rise

Over the past several years, the incidence of teen smoking has declined (and leveled off after years of decline in other age groups). But ask any middle or high school Principal and they will likely tell you about a dramatic rise in vaping (e-cigarette use) among students as young as 6th grade.

These products are marketed as “safer” alternatives to traditional tobacco, and do contain less of the carcinogenic ingredients found in tobacco products. Despite that, e-cigarettes do have serious proven health risks, especially for young users. Recent news stories about users suffering reactions to vaping products ranging from allergic reactions to multiple deaths highlight the fact that much is still unknown about the risks of these mostly unregulated products.

E-cigarettes work by heating up small amounts of liquid infused with a variety of substances, creating a vapor cloud which is inhaled like a traditional cigarette. The base liquid is an oil but is normally infused with nicotine (an addictive substance that can be delivered in higher concentrations than cigarettes), various flavorings, or even a marijuana extract called THC.

According to the Centers for Disease Control, nicotine is a highly-addictive substance that can cause temporary and permanent damage to growing bodies and minds. Exposure to nicotine among youth is particularly dangerous since it has been shown to have an effect on key brain receptors, making young people more susceptible to nicotine addiction. There is some evidence that far from being a “safe” alternative to tobacco, vaping actually increases the risk for future addiction to nicotine or other addictive substances.

Despite this evidence companies such at Juul continue to market the liquids with kid-friendly flavors (such as “Pink Lemonade” or “I Love Candy Raspberry”). The e-cigarettes themselves can be purchased disguised as pens, USB flash drives, or even the pull-strings on a hoodie. These items are clearly marketed toward an underage demographic, as no adult using vapes as a smoking alternative would need such a product.

What can you do to protect yourself and your children? 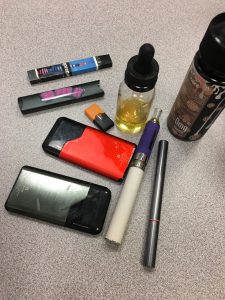 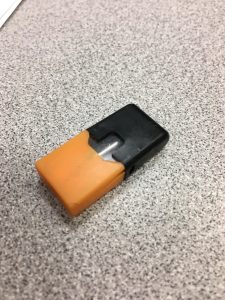